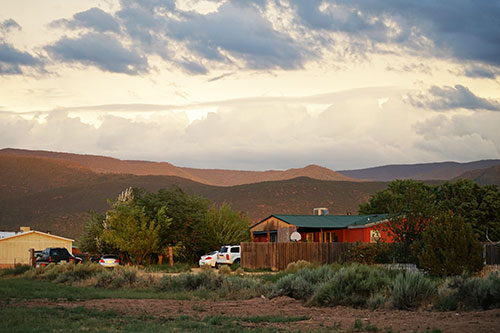 4 May 2022 (Llano Quemado, New Mexico) - View from my kitchen window: What began as a few plumes of white over towards Las Vegas on or about the 20th of April became 75,000 acres forest fire on Friday; as of this morning it has grown to 160,000 acres and it is only 20% contained.  Evacuation centers are open in Penasco and Taos - the towns of Mora and Las Vegas are under severe threat and total evacuation.  The cause seems to be a "controlled burn" by the Forest Service. Homes, vacation cabins, livestock, wildlife - gone.  Have been roaming the roads in these villages for 55 years - so many beautiful days!  Heavy smoke from this fire and the one burning in Jemez. Fear, sadness - deep grief.  Prayers for the firefighters, all those evacuees - we need prayers - and a lot of rain!

Our clear and present danger sure takes the attention off the war in Ukraine.  Ali Velshi is back home covering all the abortion news.  President Zelensky's fear that the world will look away from the horror and destruction is becoming a reality.  Less news from there this past week.  They say no news is good news.  That doesn't feel right.  The gung ho enthusiasm for the Ukranian fighting spirit isn't quite as loud and bullish as it was.  Imagine Ukraine a year from now - will these brave people will still be fighting this fake-made up war?  Will the devastation be so complete that the rest of the world will be forced to look away?  Considering that all of Europe is under threat now it is hard to imagine that will happen.  Heard Chef Jose Andres say this country will need a Marshall Plan in order to rebuild.  Prayers for the Ukranian people.

Ah, and then there is our "Supreme Court" and their leaked decision to overturn Roe v. Wade. Crusty old men and one evangelical white woman with a really annoying voice are deciding the fate of American women - and men.  Think the dog has caught the car this time and they have taken too big a bite out of women's rights.  No doubt they will come for LGBT rights, birth control, gay marriage - power and control.  Their fear of the changing demographics in this country is palpable.  If I was a defeatist, I would say that we are screwed!  Scary men are doing scary things under the guise of protecting our freedom and liberty - all in the name of Christianity.  Sadly Christ is nowhere to be found in this New World Order. Considering their ex-President is acknowledged to be a serial sex offender and two of the Justices are alleged sex offenders...how dare they? Prayers for the Justices of the Supreme Court.

Graduated from high school in 1957 - and Roe v. Wade became law in 1973.  Yes I remember the "good old days".  Wealthy families in Chicago Heights and Flossmoor sent their girls to Florida to have an abortion or give birth and put their babies up for adoption.  My best friend returned from her Florida trip to find a surprise from her daddy - a white Cadillac convertible - she felt no joy when we all piled in with her for our evening "joy rides". She was always sad and broken and I know that every day of her life she thought about her baby.  In our town there was a three story brick house with a long flight of stairs going to the top floor.  Everyone knew that was the place where girls from not so wealthy families took care of their problem. This is what I know is true....I believe in the right to choose.  I believe this, in most cases, is a the most painful choice a woman will ever have to make, but it is her CHOICE.   We are at the mercy of a sweeping authoritarian movement. Prayers for all women everywhere today.

PS: The smoky skies have cleared this afternoon - praying for rain.  DC